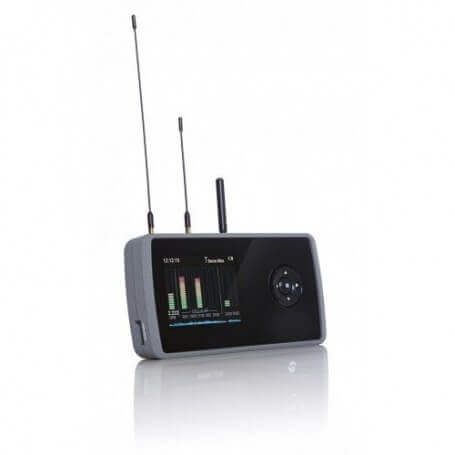 WAM-108T. Multiband frequency detector with direct viewing system and range up to 50 meters. It allows you to see simultaneously the activity of several hidden spy devices quickly and easily. Ideal for detecting GPS locators, spy cameras and hidden microphones using the latest technology.

Would you like to buy the WAM-108T frequency detector?

The WAM-108T is a frequency detector designed to detect and localize signals used by the most demanding users. latest covert surveillance devices. It includes a completely new hardware design with new features that have never been seen before in a handheld RF detector.

If you need to do a TSCM sweep and locate these devices the WAM-108T frequency detector won't let you down. Don't let them spy on you!

The WAM-108T allows you to easily identify and detect in one distance up to 50 meters:

All detected signals up to 6 GHz will be displayed simultaneously on its TFT screen using a bar type system to graphically identify the signal type and strength. This can be particularly useful when searching for pulsing or "bursty" devices such as GPS locators. It also has an "activity" log of up to 4000 events for further site analysis.

The broadband detector provides the highest range of coverage of all RF activity in the target area (0-14 GHz). It has an unmatched Frequency range from 0-6 GHz. and unmatched sensitivity. It detects in particular the highest frequencies used in the latest spy devices.. Now it can not only display most digital signals but will detect analog signals up to 6GHz and see them easily with the WAM-108T.

The WAM-108T uses a separate 2.4 GHz and 5 GHz band that helps to identify the growing threat of the latest generation of spy devices. These devices allow, for example, to record audio for long periods of time and transmit them regularly in short bursts.

Example 1: Hidden in-vehicle GPS locator that stores GPS positions during the day in its internal memory and transmits them at 03:00 when it is more difficult to detect.

Example 2: Audio recorder hidden in an office that stores all conversations in its internal memory and transmits them via WIFI at 02:50. The WAM-108T also detects other devices used in covert surveillance such as wireless video transmitters.

The WAM-108T's complex algorithms will analyze the detected signal/s to help identify the current signal type. It is suitable for use in any environment where radio frequency detection is required such as:

An intuitive color display that allows the user to perform real-time detection or to view activity logs that have previously occurred. Each of the eight individually detected bands has a 20-element bar that allows you to measure the signal strength of the source to find it easily. All detected signal frequencies can be viewed simultaneously.

In addition, you can also select the frequency bands you want to detect. This allows you to ignore frequencies that are of no interest. For example: if you don't need to search for Bluetooth devices you can switch off that frequency.

Signal strength can be monitored using the 'Beep' mode (audible mode) to work without looking at the screen or with the vibration mode (silent mode) for discreet or covert use. Detected signals can be heard through the built-in speaker using the 'Audio Demodulation' function, useful in detecting conventional analogue bugging.

Up to 4000 events can be stored in its internal memory for display in list or graphical form. For each detected signal, the time and date, duration, frequency band, and signal strength will be recorded. Short, continuous bursts can represent GSM band devices such as GPS locators. These can be clearly seen in graphical mode as a regular spacing of lines representing pulsed transmission. It can also examine cellular activity at certain times of the day or unauthorized systems to help identify mobile phone usage in sensitive areas. All logs can be downloaded to a portable USB flash drive for later storage on any PC.

The new digital viewer software for Windows operating systems allows the SEM-108T memory log to be downloaded to a portable USB flash stick and then viewed on a PC in a graphical format or an easy to read list. Events can be scrolled manually or across time intervals and/or on specific dates.

Why do I need to buy the JJN WAM-108T frequency detector?

Many criminals and criminal organizations use GPS locators to place them on their victims to track their movements such as jewelers and businessmen. It can also be used to ensure that a hidden wireless transmitting device has not been installed in an office or conference room.

The WAM-108T scanning system uses the best portable technology only available to the most demanding. If you want to make sure you don't have any gps beacons, cameras or encrypted microphones in your car or office, you should use JJN's WAM-108T.

Where to buy the JJN WAM-108T portable frequency detector and GPS beacon detector?

You can buy the JJN WAM-108T frequency detector directly on the website or in our physical store. We are official distributor of the brand in Spain so you will always get the best price and an official guarantee for 2 years. Direct sale, without intermediaries.

The WAM-108T is designed and manufactured to the highest specifications and is encapsulated in a machined aircraft-grade aluminum housing and customized. It uses an integrated lithium polymer battery. The complete system is supplied in a heavy duty military standard case for maximum protection.

Features of the frequency detector WAM-108T