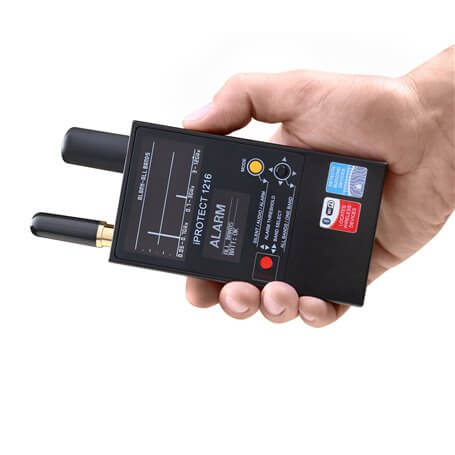 Detector cameras and hidden microphones iProtect 1216. Easily locate all types of devices, wireless transmission up to 12 GHz. It has 3 bands of frequencies are differentiated. Direct from the factory.

Would you like to buy the best detector cameras and hidden microphones?

We present the best detector of cameras and hidden microphones for the counter-espionage that we have tested. Not available in any other shop in Spain. It incorporates the latest technology on the market. Detects even the devices more hidden that transmitted by frequencies higher than 5Ghz. Just try it, you'll be amazed!

Main features of the detector cameras and hidden microphones:

What devices can I detect with the iProtect 1216?

How do I operate the detector cameras and hidden microphones?

The detection range of the iProtect 1216 has been divided into parts, each with a graphic of bars specific:

The separation of the graph separate allows you to better understand which type of signal is detected, to detect multiple signals at the same time and maintain the ability of detecting near emission sources.

Band of Microwave and wireless

The third band of the "microwave" of the iProtect 1216 covers the frequency range of 3-12 GHz. This band detects Wifi and other wireless protocols that operate at 5 GHz and in any frequency range higher.

It is assumed that the frequencies of microwaves are more hidden, since they are not detectable by the detectors of a common RF. The iProtect 1216 found these signals easily.

With this feature enabled you can set a threshold of background. When any signal exceeds this alarm threshold, the iProtect 1216 issued a sodium alert.

The alarm function will help the operator to reject the interference of the background by adjusting the threshold. When a signal exceeds the alarm threshold, the device produces an alert sound.

When you use the display “ONE BAND”, the iProtect 1216 will show you the history of the signal obtained during the last 5 seconds. It is very useful to observe signals that work bursts. You'll be able to easily detect all kinds of GPS locators.

In addition to drawing a bar chart, the iProtect 1216 can identify the types of signals and show a message on the screen, such as, for example: device DECT wireless in "idle" state, device DECT active, GSM, 3G, Wifi / Bluetooth.

With this device, you'll be able to easily detect all types of cameras and hidden microphones that operate in WIFI, 3G and Bluetooth. It has a sensitivity much higher on the detectors often conventional.

It can also be used to locate the students who copied in exams using spy cameras, necklaces inductors or transmission equipment wireless.

What differences exist between this detector cameras and hidden microphones, and other detectors?

The main difference of this device is the ability to detect the devices more sophisticated, operate at very high frequencies. The most traditional detectors up to 3 GHz. This means that the signals such as for example the WIFI PLUS, 5.4 GHZ do not detect. The iProtect 1216, locate and identify signals up to 12GHz.

This device, manufactured in Ukraine, employs the latest technology in the market. All its components have been perfectly chosen to give you the highest reliability in the detection. If there is a camera or microphone hidden, the iProtect 1216 what you will find.

Where to buy the best detector of cameras and hidden microphones?

This product is not what you will find in any shop of products spy. To look out is the official distributor of this device manufactured by Digiscan Labs. Buy your device directly from factory, without intermediaries.

We offer a 2 year guarantee and a technical support officer. If the product does not convince you you will have 14 days to return it. Come to any of our tiendas physical to prove it. You will be surprised at the amount of spy phone products that we have for you.

Technical specifications of the detector cameras and hidden microphones

ESPIAMOS, as a brand belonging to HISPA IMPORTACIONES DELUXE, S.L. , is the official distributor for SPAIN of this device and all the products of the Digiscan Labs brand. Buy directly, without intermediaries and with factory service. We do not offer warranty, technical support or advice of the devices with serial numbers that do not come from the official channel. Be wary of companies, websites or portals that can not prove brand identity. 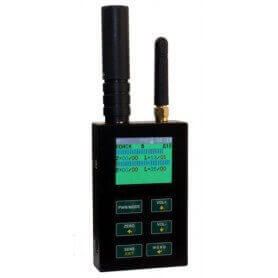 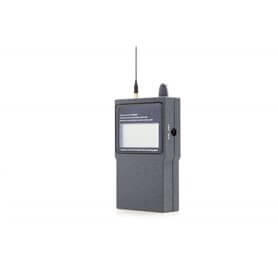 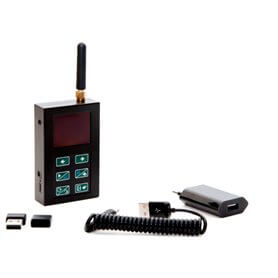